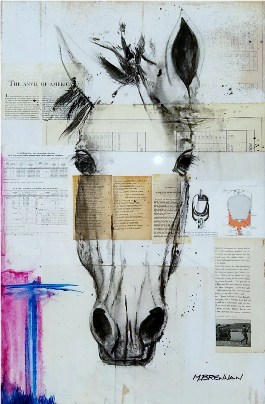 The art of Michael Brennan will be on display at The Vault at 1930 Art Gallery from October 13th – 15th. The gallery will host a cocktail reception from 5:30pm to 8pm on Friday October 13th to kickoff the show.. The public is invited to attend and we request the courtesy of a RSVP to info@thevaultat1930.com for those planning to attend the reception.

Michael Brennan began creating his own works of art at an early age.  His passion for modern art led him to explore the use of collage underlying various painted subjects including wildlife, aviation, architectural illustration, and advertising composition, among others.

Michael’s process begins with plywood panel construction, collage of vintage text and technical drawings for aesthetic value, layered with a painted image in acrylic, charcoal, oil, pastel, and resin.  His large-scale pieces measure up to eight feet by six feet.

Michael was awarded “Best in Show” at the Old Fourth Ward Arts Festival in Atlanta in 2016.  The same year he was a featured artist in the Louisville Festival of the Arts and received an Award of Distinction at the Gulf Breeze Art Festival.  His art has been featured in past issues of Churchill Downs Magazine. He has many commissioned pieces to his credit and exclusive interior design in several restaurants including Chop House on the Bricks in Thomasville, Georgia.