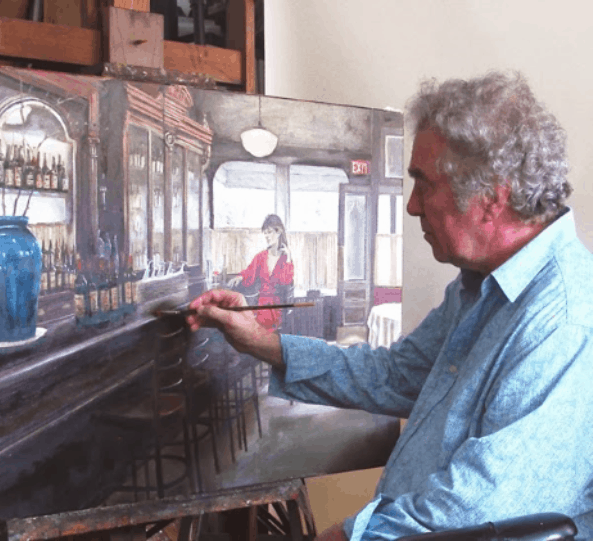 Join us at The Vault at 1930 Art Gallery through August 31st as we celebrate the life and work of renowned artist Harry McCormick. Gallery Hours – Tuesdays through Friday 10am to 5pm and Saturdays 10am to 3pm. Call 904-398-2890 or email us at info@thevaultat1930.com for appointments outside of normal business hours.

Basically I have been a painter of ‘ interiors ‘ although not exclusively as there have been other venues as well. You could call me a painter of ‘ genre ‘ as well, meaning ordinary people doing ordinary things such as recently painting a series of painting of people looking at paintings in museums and galleries. It gave me an excuse to do copies of other great paintings done be such painters as Picasso, Monet, Cezanne, Sargent, and the like. Painting bars has been an ongoing theme of mine for many years. I have traveled the world looking for interesting bars and the people in them. I did a show in Chicago of the Victorian Pubs of London, in New York from the Plaza Hotel Oak Bar to McSorley’s Old Ale House, which is one of my favorites and one that I have been painting on and off since 1983. I like very elegant interiors as well as funky places. I’ve painted the mansions of Newport, Rhode Island to the Breakers and the Flagler Mansion in Palm Beach. I’ve painted the bars of South Beach, Miami. I done bars in San Francisco, Chicago, Paris, London.

Having practiced Aikido and Zen meditation for 45 years I have painted some pictures related to these things. But recently I had been asked by the Owl 57 Gallery to try my hand at painting Jewish subjects. It was difficult for me at first, having been raised in an Irish Catholic background. But my mother had a Jewish heritage and Rabbi New from the Boca Raton Chabad assures me that I am Jewish. He took me under his wing and somehow thru him I got a handle on painting Judaica. This art is shown at the Chassidic Art Institute in Brooklyn, NY.

Past Shows and Past/Present Collections and Galleries